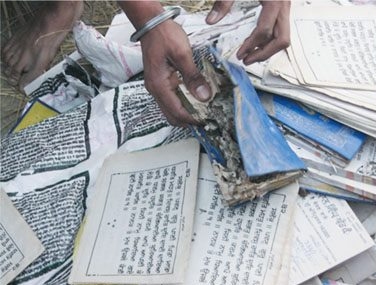 When the matter became public, Guru Granth Sahib Satkar Committee and other organizations reached on the spot and cordoned off the Card Board Factory.

On the demand of the Sikh Sangat, police finally booked the owner of the Card Board Factory Ravinder Kumar and Arun Kumar under section 295-A for willfully hurting the religious sentiments of particular community. Before the situation slipped out of control, police arrested both the accused followed by the immense pressure mounted by Sikhs of the area.

Accused told the police that they have purchased the pages as junk from Jawahar Publisher and they were never aware off that pages were the part of Holy Guru Granth Sahib and could create such a big matter.

On being investigation, police found that Jawahar Publishers are based at Amritsar who were publishing the copies of Guru Granth Sahib long back but stopped printing when Punjab Government slapped blanket ban on publishing of Guru Granth Sahib by any private publisher and sole rights of publishing were given to SGPC. Pages in bulk were decaying with the publisher who instead of  carrying out respectful cremation of pagers they sold it to Card Board factory in scrap in order to make money which hurt the sentiments of Sikhs.

Sri Guru Granth is the living Guru of Sikhs and carries the teaching of Sikh Gurus and many Bhagats. Supreme Court of India has already delivered judgment on this issue.

In case, when copies of Guru Granth Sahib damaged or its pages, never destroyed in haphazard manner or thrown to scrap dealer. Since for Sikhs Guru Granth Sahib is a living Guru, so old damaged copies always cremated with Sikh religious tenets in the presence of five Sikh head priests after performing Ardas.