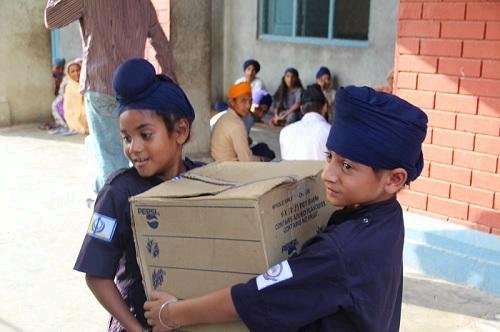 A Visit to Central Khalsa Orphanage

Comments Off on A Visit to Central Khalsa Orphanage 516 Views

India:-“I’m thinking to invite whosoever wishes to come race go karts and go swimming for my birthday.” I told Pooja. She smiled saying she thought it was a good idea. Later that evening, she sent me an email suggesting that I take the money that would have gone to all the fun and games and bring sweets and samosas to the students at Central Khalsa Orphanage just 25 minutes from Miri Piri Academy.

I considered the idea. “Of course! That is a great idea.” For some reason, I felt a sleight level of anxiety as I committed to the plan. We decided would invite MPA students to come serve and meet the students of CKO. Something I know about myself is a mild creeping pessimism that lurks in every decision I make. Would the children appreciate the sweets? Was this more self-serving that service to others? Would the MPA students and CKO students get along? I decided to stow my worries and prepare for the trip.

Turns out that I did not need to do much! I have great friends. My co-teacher James put the word out that if people wished to give me presents, they should simply contribute to the pool that would go to the children. Pooja, my colleague in the front office, arranged everything with the superintendent of the orphanage.

All I did was invite any students that wished to join us on that day, for which they would be sacrificing a chunk of their rare town leaves. 25 students volunteered out of a student body of 130. I was so touched and impressed that these ever-busy students would sacrifice a chunk of their free time to serve. Their ages ranged from 7 to 18 and they were all enthusiastic for the visit.

A dash of anxiety still remained in the soup of my mind. Apparently, the school would read an ardas for my blessing in thanks. That set me ill at ease as well. It felt like my attempt at altruism had become some sort of spiritual transaction. Is that what it was?

Saturday unfolded perfectly. We picked up the sweets and carted the MPA students to the orphanage. I was still concerned for how it would go. I simply chose to adopt an attitude of acceptance. I could not control the situation, so I just let it happen and fixed my attitude.

Things couldn’t have gone more smoothly. The superintendent greeted us at the door and explained the schedule; we would take a brief tour of the campus before reading ardas and serving the students. The most fascinating part of the tour was a room that held several handwritten Siri Guru Granths. They were beautifully written with intricate border work and paintings. One of the volumes had a particular attribute. In the margins of the first several pages were several saffron colored swastiks, a Sanskrit symbol* that marks auspiciousness.

After visiting the grounds, we read ardas and served the students. Pairs of MPA students would carry heaping trays of gulab jamun and samosa to serve. Our hands were sticky and oily and everyone was smiling. After serving, we joined the community and I waited. I was waiting to see if we would mix in and meet the residents of the school. It happened. After eating, the next thing I knew I had a throng of young men around me asking questions in English and Punjabi, younger kids played on a rickety playground, some of the older kids shot a basketball around, and the general mood was jovial. I felt as satiated as if I’d eaten a good meal. It was surmounting even my best wishes. MPA students demanded we return soon and so did the students at the orphanage.

When we let go of control and simply choose an attitude, it doesn’t matter what happens in the sense that your attitude is unwavering. No matter what had happened, we maintained our sense of giving and the service was well rewarded with new friendships. Even if your service is something as minor as giving people something like sweets, it does not matter, it opens up a space for connection that is invaluable. I’m sure the school will have much more contact with the sweet kids we met at Central Khalsa Orphanage.

Previous: Day of Service in Camden, New Jersey, USA
Next: Sifting the Dust of 84 Pogrom for Some Positives ~ Part VI of VI