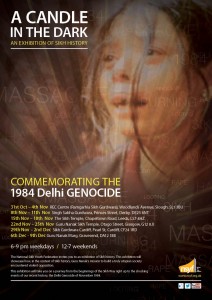 London,UK: In a press statement the National Sikh Youth Federation (NSYF), a UK based Sikh youth body, has revealed it’s plans to hold an exhibition on various places in the UK. This is the first exhibition of this nature, curated by a team of professionals, which has been developed within the Sikh community.

“Following on from the success of our #10DaysofTerror campaign NSYF began planning the next project. We came together with a view to host an event to shed light on the genocide of the Sikhs in November 1984” Shamsher Singh, a representative of NSYF told Sikh Siyasat News.

“This idea developed into the exhibition that was launched on 30th October from the new Houses of Parliament Building. Just like our previous campaign the title itself serves as a message that there is a larger story to be told. For us the name represents the spiritual and political ideology of the House of Guru Nanak and its opposition to tyranny and the way of the dictator. Guru Nanak came into this world as a blazing light, his philosophy revolutionised the way in which people perceived the world around them; so much so that even today we are still digesting his message” he added.

He further informed that the exhibition will show how, in the context of Sikh history, Guru Nanak’s mission to build a truly utopian society encountered violent opposition.

The exhibition takes the viewer on a journey through the challenges the Sikhs  have faced from the beginnings of the Sikh Way, right up to the shocking events of our recent history, the Sikh Genocide of November 1984.

An estimated 15-30,000 Sikhs were killed, there are no definitive figures as even today mass graves are being uncovered. This orchestrated and premeditated attack aimed to vanquish enduring proponents of Guru Nanak’s ideology; who did not succumb to the atrocities of the military attack on various Gurudwaras, including Sri Darbar Sahib, Amritsar (‘Operation Blue Star’) and the purge of Sikh youth in ‘Operation Wood Rose’.

“For the last 28 years Sikhs all over the world have gathered in annual remembrance of the tragic events of November 1984. Despite numerous commissions, inquiries and independent reports that identify the role of senior politicians, police officers and individuals in the organised carnage, justice has not been delivered. One step to ensuring that these atrocities are not repeated is to spread awareness of the causes and shed light on environment in which Sikhs became targets for State violence. Knowledge truly is power”, the NSYF representative added.

According to reports the National Sikh Youth Federation (NSYF) gathered at a Sikh Lobby in the new Houses of Parliament building’s Boothroyd Room to talk with Members of UK Parliament.

“We discussed the findings of our research into the role of the police in Delhi 1984 and launched our exhibition. We were delighted with the support shown by the Sikh community and the Members of Parliament” Shamsher Singh told SSN.

Previous: Thousands gathered in Toronto to mark 28th Year of Genocidal Attacks on Sikhs in India
Next: Sikhs in Catalonia support independence movement