PATIALA: PANJAB.A 400-year-old ‘rabab’, traditional stringed musical instrument, and a painting exhibition based on the ragas used in Sri Guru Granth Sahib remained the attraction on the concluding day of the three-day Gurmat Sangeet Utsav organised by the department of gurmat sangeet, Punjabi University, here on Thursday.

The rabab, which is believed to be from the era of the Gurus, remained the centre of attraction for the visitors.

JS Bhatia, the coordinator of the event, who had discovered the musical instrument at a gurdwara during his PhD research work, shares its historical significance: “I chanced upon the rabab and some other relics from Gurus’ era at a gurdwara in Fatehgarh Sahib. The rabab appears to have been made during the 16th century on behest of some Rajput king who offered it to Sikh Guru Arjun Dev, from where it must have travelled to Anandpur Sahib, the seat of the tenth Guru. Perhaps during exodus from Anandpur, it was stored in a trunk along with weapons and other relics – where it waited for centuries to see the light of day again.”

‘Symphony – a homage of colours’, an exhibition of 31 paintings by Toronto-based artist Hardev Singh, was a visual depiction of the artist’s imagination of the 31 ragas used in the Guru Granth Sahib.

A large number of people were attracted by the paintings which gave a pictorial perspective to the ragas from the scripture. For instance, raga ‘bilaval’ mirrored its mood from river of fire, raga ‘megh’ expressed its form in heavily water-laden clouds, ready to shower blessings. 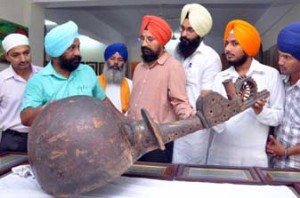 Previous: SC: Punjab must give flats to ’84 riot victims
Next: All set for Babe da viah