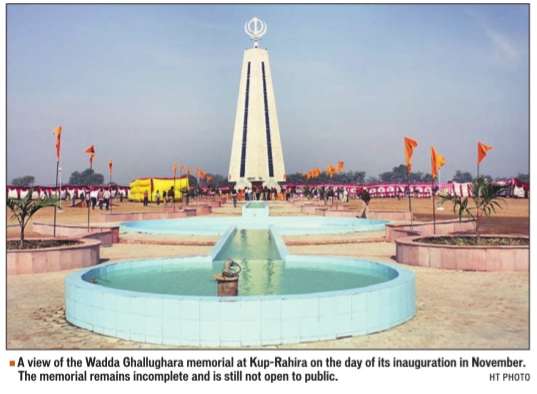 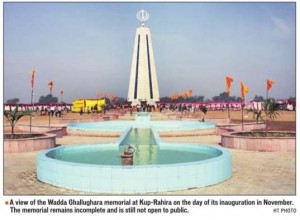 It’s been over two months that the chief minister inaugurated an incomplete memorial to the Wadda Ghallughara that is still not open to public. Shiromani Gurdwara Parbandhak Committee (SGPC) towards promoting Sikh heritage, failed to mark the 250th anniversary of the Wadda Ghallughara (Great Holocaust) on Sunday.

It was on this day (February 5) that more than 45,000 Sikhs are believed to have been killed in a war with Mughal emperor Ahmad Shah Abdali near the twin villages of Kup and Rahira.

The state government, led by the Shiromani Akali Dal (SAD) did not organize any official function to celebrate what is considered the largest religious massacre ever.

In fact, last year too the SGPC and the government had given the occasion a miss, only to wake up after media reports showed the anger of the religious public. A function was thus organised on February 9, which was attended by SGPC president Avtar Singh Makkar.

This year, the occasion remained a dull affair and was celebrated by local people at Shaheed Ganj gurdwara in the village. Area SGPC representative Jaipal Singh Mandian was present and delivered a lecture on the Wadda Ghallughara.

History books say that it was at Kup-Rahira on the MalerkotlaLudhiana road in Sangrur that Abdali’s forces started the holocaust. They killed nearly 45,000 Sikhs in a march up to Kutba in Barnala in just a couple of days in a war that ended on February 5, 1762.