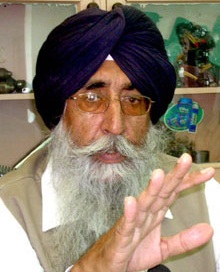 Hondh-Chillar whistleblower Manwinder Singh, meanwhile, denied having any link with the pro-Khalistani T-shirts seized by the Ludhiana police recently.

The Shiromani Akali Dal (Amritsar) president said, “Why to harass Manwinder. I have placed the order for the T- shirts. Bhindranwale is my hero.”

He said the trader was not selling weapons but simply making T-shirts. “The police has unnecessarily exaggerated the issue by showing that the T-shirt maker was indulging in anti- national activities,” he said.

Levelling allegations on the police, Mann said, “If the police seized the T-shirts due to security reasons, then why the activists were allowed to showcase the T-shirts and given the opportunity of grabbing political mileage.