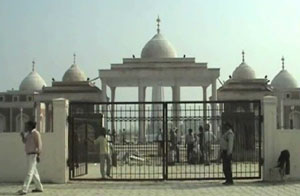 Sikh memorial in Gurdaspur to be inaugurated

Gurdaspur, Punjab: The Chhota Ghallughara Martyrs Memorial is to be opened today at Kahnuwan Chhamb in Gurdaspur district.

The Chhota Ghallughara Martyrs Memorial at Kahnuwan Chhamb in Gurdaspur district will be inaugurated by Punjab chief minister Parkash Singh Badal on Monday. It’s been built the memory of over 11,000 sikh killed by Mughal Troops at Kahnuwan Chhamb in 1746.
The Punjab government had decided to build a memorial over this historic ground a year ago. The memorial stretches over 10 acres of land and a sizable amount has been spent on its construction so far.

Chotta Ghallughara was a massacre of a significant proportion of the Sikh population by the Mughals during the waning years of the empire. An estimated 11,000 Sikhs died in these attacks.

In 1746, Jaspat Rai, a military commander of the Mughals, was killed in an encounter with a roving band of Sikhs. Jaspat’s brother, Lakhpat Rai, who was a revenue minister at Lahore, vowed his revenge. He mobilized the Lahore troops and summoned reinforcements.

The Sikhs held out for some time and struck back whenever they could. Heavily outnumbered and underequipped, the Sikh inhabitants of Lahore were first rounded up, then executed on 10 March 1746 in the swampy forest of Kaahnoovaan, near the town of Gurdaspur, about 130 kilometers to the northeast of Lahore where now stands a gurdwara.