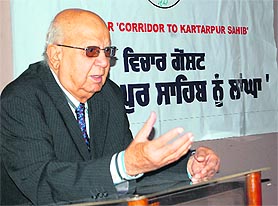 Addressing the seminar, prominent eye surgeon from Pakistan Dr Taj Kirmani said the corridor would be a milestone on the path of peace, progress and bonhomie between two nations.

He said it would erase memory of the bitter past and would open a new chapter in the bilateral progress in the sub-continent.

He said the shrine pertaining to the founder of Sikhism Guru Nanak Dev was a symbol of universal peace and brotherhood and the same could be the guiding force in future engagements between neighbouring countries.

He said he had organised many eye camps at the shrine where Guru Nanak Dev had stayed for 18 long years.

SLK president Dr Daljit Singh, a noted eye surgeon in Amritsar, said the matter of the international passage is associated with the bilateral relations between India and Pakistan. “And as long as the relations are strained, there is little hope on this front,” he said.

Convener of the seminar BS Goraya said Sikh devotees have been seeking corridor to historic Kartarpur Gurdwara in Pakistan, about 3.5 km from Dera Baba Nanak for the past over a decade. He rued that the progress was very slow and tardy.

He said that the Pakistan government had permitted the passage in 2000 while it took 10 long years for the Punjab legislative assembly to endorse this.

The state assembly unanimously passed a resolution in favour of the international passage and forwarded it to the Union government on October 1, 2010. He recalled that his organisation had submitted a memorandum in this regard to Prime Minister Dr Manmohan Singh during his visit to the holy city in 2004.

He said the then External Affairs Minister Pranab Mukherjee had visited Dera Baba Nanak, which falls in Gurdaspur district, in 2008 to assess the possibilities of setting up the corridor. However, subsequently no progress has been made forward on the matter.

SGPC member from Jalandhar Kuldip Singh said more seminars would be held with a view to mobilise people and their opinion on the matter. He said the next seminar would be organised at Batala.

Surinder Pal Singh, chairperson, Guru Nanak Mission Society of Atlanta, USA, said the move must be aimed at propagating the philosophy and message of universal brotherhood.