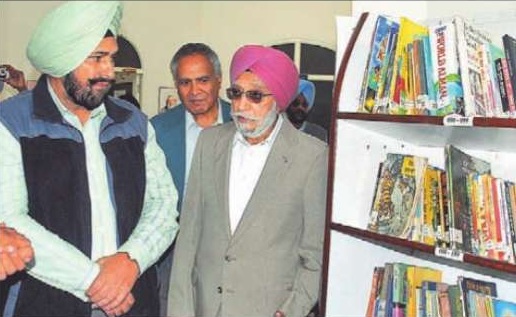 Ludhiana, Punjab: After running a mobile library in six villages of Ludhiana district for six years, Jaswant Singh, an NRI, has now set up a library at the cost of Rs 20 lakh at his native village, Jurahan near Ludhiana.

He conceived this idea and took the initiative of implementing it with his own financial resources. He has built the library on his own land. Jaswant and his wife Jasjit Kaur, both entitled to pension from the US, contributed the money for this project.

The newly built library, which has 4,500 books on literature, science, health, history and children literature, was inaugurated on Saturday.

While Gurbhajan Gill, president of Punjabi Sahitya Akademi, presided over the function. Amarjit Singh Hayer, former professor of journalism at Punjab Agricultural University, and artist Kamaljit Neelon were among those present.

Gill said though various people were contributing in different fields, the initiative of setting up libraries was more constructive and would make our society more progressive.

Talking about his vision, Jaswant says reading good books can empower people with progressive ideas and motivate them to make society more progressive and just.

“In the west, there is a library in every locality.

However, this culture is missing here. This is what prompted me to take this initiative,” he adds.

In 2003, Jaswant launched the mobile library. He bought a bus, stocked it with 2,000 books, made seating arrangements inside it and embarked on his journey to reach out to people. Six village — Jurahan, Kalkh, Dhool Kot, Gujjarwal, Phallewal and Ranguwal — were chosen for this project. The bus went out twice a week.

“People of these villages were informed about the arrival of the bus in advance.

We received a good response from the villagers, with 600 to 700 readers coming to the mobile library every month,” Jaswant adds.

The members were issued books from the library, while non-members could pick up books and read them at the library.

He says before initiating the mobile library in 2003, he met politicians from parties and asked them to support his cause. When none of them came forward, he decided to start the project on his own. He ran this project till 2009, after which he started work on setting up a library at his village.

Profile Jaswant Singh completed a PHD in library science in America. Before moving to England in 1964, he was a geography teacher at Malwa Training College. From England he moved to Canada.

After teaching social sciences at a government institute there, he relocated to the US on a scholarship. He completed his masters in library science and joined as the regional media director in Michigan.