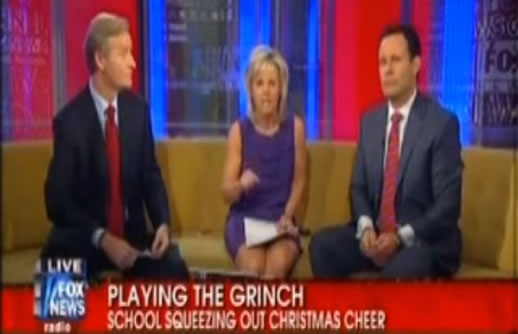 Stockton, California: According to Fox News Channel’s “Fox & Friends”, the Sikhs of Stockton, CA are killing Christmas. The hosts of Fox News Channel’s nationally-airing morning program, Fox & Friends, went on a diatribe about the policy of a school in Stockton, California to maintain a non-denominational holiday celebration within its classrooms.  One of the hosts, Gretchen Carlson, went on an especially disdainful rant and cited the presence of Stockton’s Gurdwara and Sikh population, the oldest in America, as the reason why the Christian aspect of the season was being downplayed by the school. From News Hounds:

Reading her material, she said that “one of the other rationales that the school administrator mentioned that the first Sikh temple in the west is located in their city so they didn’t want to offend those people.” (Last two words emphasized) With a look of absolute disgust on her pretty face, she threw her paperwork across the stage. Kilmeade “joked” that they “seek not to offend.”

Obvious arguments about the separation of church and state that is being appropriately applied by the school would be lost on these hosts and many of the followers of Fox News, however it is disturbing that they have openly vilified and mocked Stockton’s Sikh population on national television.