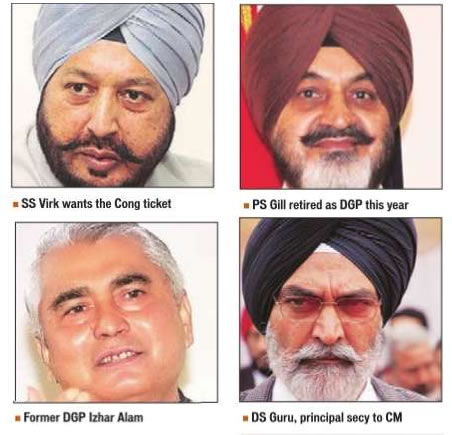 Chandigarh, Punjab: Several retired IAS, IPS officers are seeking the all-important ticket. Gone are the days when bureaucrats or police officers only wanted to go quiet after retirement. Several notorious former police and civil officials from Punjab are eyeing an entry into the political arena.

Be it a retired IAS officer, a former divisional commissioner or a retired director general of police, they are all keen to contest the forthcoming assembly elections.

Former Punjab and Maharashtra DGP SS Virk, much favoured by Capt Amarinder Singh during his term as Punjab chief minister, is seeking the Congress ticket from Dasuya in Hoshiarpur district. Another retired DGP, Paramdeep Singh Gill, whom the SAD-BJP government brought especially from Jammu and Kashmir, is in the race for the Akali ticket from Moga.

Other ex-DGPs in contention for the Congress ticket are DR Bhatti (from Ludhiana) and Chander Shekhar (Khanna).

Retired DIG HS Chahal, who was earlier seeking the SAD ticket from Maur in Bathinda district, now wants it from Talwandi Sabo, his hometown. Sukhdev Singh Brar, a retired superintendent of police who served as personal security officer (PSO) to chief minister Parkash Singh Badal, wants his boss to consider his candidature from Amargarh (Sangrur).

Senior IAS officer Darbara Singh Guru, currently serving as principal secretary to the Punjab CM, is vying for the SAD ticket from Bhadaur constituency in Sangrur district. Though Guru is keeping his cards close to his chest, sources in the government revealed that he may put in his papers anytime to pave the way for his candidature.

LR Nayar, who recently retired as chief income tax commissioner from Himachal Pradesh, is making efforts to get the Congress ticket from Phagwara, his hometown.

MS Birdi, who retired from the Indian Economic Services (IES), and SS Dure, a former assistant excise and taxation commissioner, are competing for the Congress ticket from Adampur constituency.

SR Kaler, additional deputy commissioner, Ludhiana, is interested in contesting from Jagraon on the SAD ticket.

When asked why so many babus wanted to take the political plunge, Dr Pramod Kumar, director, institute of development and communication, said, “Politics nowadays has become a profession rather than the mission. It has also provided occupational mobility to bureaucrats, especially during the past two decades. And of course, there is more power to be wielded.“

“Full-time politicians failed to deliver and let the people down. As a result, bureaucrats and police officers have begun to see it as a chance to fill the void,“ he added.