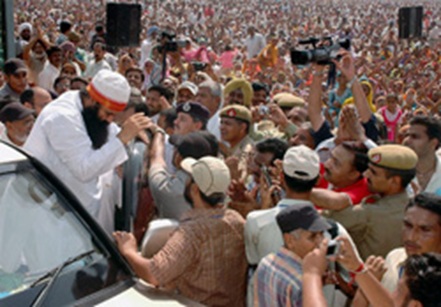 Chandigarh, Punjab: The Dera Sacha Sauda is all set to jump into the 2012 poll fray in Punjab, a significant move by the influential and controversial sect that has the potential to upset electoral calculations of major political parties.

Sources in the Dera, which is headquartered in Sirsa, Haryana, told Hindustan Times that its ‘political affairs wing’ would launch a “massive exercise” in Punjab to ascertain if its followers should collectively support a single party or individual candidates in the elections.

A senior member of the Dera’s political wing (speaking on condition of anonymity) said on Sunday that they had worked out a plan to seek their supporters’ opinion on the issue in the first week of December. “We will ask premis (Dera followers) if they want to collectively support a single party, individual candidates or different parties in different regions of the state,” he said, adding that the opinion of the majority would be considered.

A decision to be active in Punjab politics was reportedly taken at a meeting of the political wing in Sirsa recently.

Repeated attempts to contact Ram Singh Insaan, the Dera’s political wing head in Punjab, proved futile. All political parties in Punjab want the Dera Sacha Sauda on their side, and efforts have been underway to woo the sect.

Around 10 days ago, People’s Party of Punjab president Manpreet Singh Badal visited the Dera headquarters. With an eye on the all-important Dalit vote, the ruling Akalis too have softened their stance towards the Dera, allowing it to open branches in Punjab. This, despite an edict by the Akal Takht against the sect.

The Dera set up its ‘political affairs wing’ before the 2007 assembly polls in Punjab and urged its followers to back Congress candidates, giving a new twist to the electoral and politico-religious affairs in the Akali heartland of Malwa.
A few months later, Punjab was gripped by communal violence between Dera followers and Sikhs after the sect head Gurmeet Ram Rahim allegedly dressed up like the 10th Sikh guru, Gobind Singh.

However, in the 2009 Lok Sabha elections, the Dera chose to support individual candidates, pleasing both the Akalis and Congress.

Premis have a substantial presence in Malwa. According to some estimates, the Dera Sacha Sauda’s leap of ideology from a spiritual organisation to a political force to reckon with translated into 7 lakh votes in state.

The Dera claims the number is as high as 40 lakh. The sect has significant support in various districts of Malwa region (comprising more than 60 assembly seats) Bathinda, Mansa, Faridkot, Moga, Ferozepur, Sangrur, Patiala and surroundings areas.

Its influence in the Doaba and Majha belts (that together have 52 assembly seats) is, however, limited.

In the 2002 assembly polls, the Congress successfully wooed Dera followers, with one ticket from Joga constituency of Mansa district allotted to Sukhraj Singh Natt, a stanch Dera follower. He, however, lost to SAD’s Jagdeep Sigh Nakai.

In the 2007 assembly elections, Congress leader Harminder Singh Jassi (whose daughter is married to the Sacha Sauda sect chief’s son) got a ticket from Bathinda.

2011-11-28
SSNews
Previous: Amidst 1984 carnage, there were saviours too
Next: Badal can win Nobel for corruption: Capt