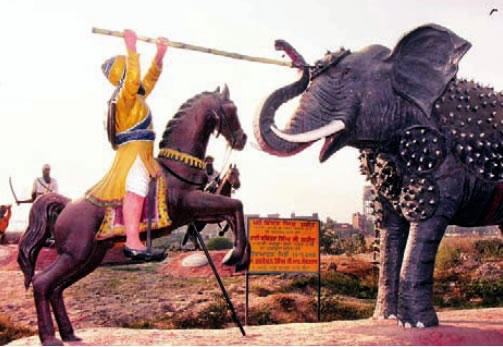 Carving out a piece of Sikh History

Comments Off on Carving out a piece of Sikh History 1,272 Views 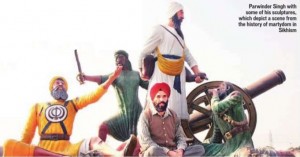 Mohali, Punjab: Through the use of sculptures, an artist and founder of an SAS Nagar-based Sikh museum, attempts to educate people about a part of Sikh history.

Hailing from Sector 41’s Buterla village, Parwinder Singh, formerly a scooter mechanic, has been designing sculptures of Sikh martyrs for the past 12 years. These sculptures, made from fibreglass, have been displayed at the Sikh Museum in Balongi village, SAS Nagar. Wanting to share Sikh history with the masses, he first established the museum on the SAS Nagar to Landran road in 2005 and then shifted its base to its current location three years ago.

Parwinder, who also founded the Sikh Heritage and Cultural Society in 2003, says the museum, which is spread over a kilometre, projects the heroic deeds of the Sikh martyrs. “I wanted to create a permanent platform, where people could easily learn about the rich history of the Sikhs,“ he shares.

The artist says he was inspired to construct the Sikh Museum with sculptures depicting the history of martyrdom in Sikhism after a visit to Gurdwara Mehdiana Sahib (located in Mehdiana village, Jagraon, Ludhiana district) seven years ago. Situated outdoors at the gurdwara grounds, there is a comprehensive display of sculptures, which portray many of the important events in Sikh history. “Art innately comes out of inspiration, and for every artist, there has to be a guiding force. After my visit to Mehdiana, I decided to create a place like this, but in an enclosed space, so people can comfortably visit year-round.“ 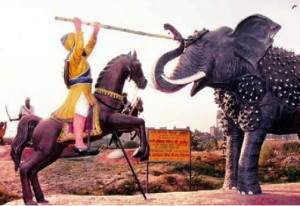 To fund the construction of his museum, Parwinder had initially received financial aid from several politicians and an SAS Nagarbased politician had provided the land. But now, he says, due to a lack of support from the government, he is running the museum independently with only the help of donations from visitors.

Parwinder employs six people to assist in the maintenance of the museum, but as there is no museum entry fee, he uses the donations to pay their salaries.

“Whatever I collect from the donation box, I distribute among the workers. I also exhibit my sculptures at various gurdwaras in Delhi and Chandigarh and receive some financial assistance from this as well,“ shares the artist.