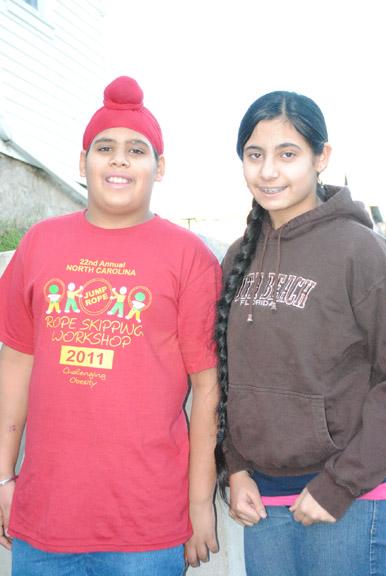 Torrington, CT: In a city too often struggling with diversity issues, it would be easy to overlook the story of two siblings from a minority population of literally just two families of Sikh Indian heritage.

Emreen and Ashiespal Bharara command at least a little attention these days, though, for their ‘political’ stature at Forbes School. Ashiespal serves as student body president at Forbes. Emreen, his sister, served in the same capacity two years ago. Both were elected by large margins by their peers.

But beyond that, they might be the best possible example of how children can teach adults lessons in acceptance.

Their father, Gurvinder — or Gary — came to America two and a half decades ago from the Punjab region of India. After a month in Stamford, he moved to Torrington and opened a gas station on South Main Street.

“I have called this city home for 25 years now,” Gurvinder Bharara said Thursday during an interview. “And the time here, I have never seen any problems with diversity among residents. We have people of all kinds come into our store — white, black, Hispanic; we have never had a problem.”

Gurvinder said he and his wife, Tarjeet, who came to the United States in 1994, are proud of their heritage and proud of their two children for their involvement at Forbes.

“They are both so smart,” Tarjeet said. “Both are in the TAG (Talented and Gifted) program and are also involved in after-school activities.”

Ashiespal, after learning he was elected study body president, said he was excited when he heard the news over the school’s loud speakers system.

“My friends and I just cheered,” he said. “It makes me feel appreciated that all of my classmates elected me over all of the other candidates that ran for the position.”

Ashiespal stands out among his peers at school for not only his academic achievements, but also because e wears a turban indicative of his heritage. But Tarjeet says her son has many friends in school and is part of the Forbes Flyers competitive jump rope team as well.

“Emreen and I tend to fit in among the rest of the crowd,” Tarjeet said. “But the men dress differently.”

Ashiespal said his fellow students don’t treat him any differently and said he feels good that his classmates supported him when he decided to run for president.

“They were really supportive, and I just wanted to follow after my sister,” he said. “She was the one who really influenced me.”

Aspiring to be a back surgeon, Ashiespal said he does not envision a career in politics, but said he likes being in charge at the school.

“They have the leadership skills, and they did it all themselves,” Tarjeet said. “We are so proud of them both. Ashiespal saw that he wanted the position and went out and got it. He is very self confident.”