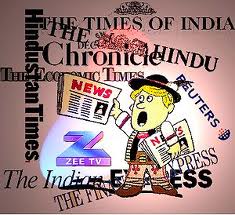 The fact is that Bhullar was not even charged in the court for attack on Saini, as court reached to the conclusion that there was no evidence against Professor Bhullar to charge him for this case.

A question arises that why such a prominent news agency of India repeatedly distributed false information to the masses directly or indirectly, through other newspapers etc. that carried PTI’s news reports? (All major newspapers, be it English, Punjabi or Hindi daily newspapers carried reports with above mentioned false information, with reference to PTI).

Now, in another news article India Today says that – “Bhullar has been on death row for 1993 terror attack and was extradited by Germany”. Note the words “extradited by Germany”. This give impression that Germany after analysing and appreciating the evidence put forward by Indian authorities, against Prof Bhullar, decided to hand him over to India for trial.

This information is totally false. There had been no extradition in Prof. Bhullar’s case. The fact is that Germany deported him back due to lack of proper travel documents. The German authorities were at error in not granting asylum to Professor DPS Bhullar. Afterwards, a Frankfurt court, when Prof. Bhullar was sent back to India, reached the conclusion that German Authorities deporting Professor Bhullar was not aware about the facts surrounding Prof. Bhullar, otherwise Germany might have granted him asylum as Porf. Bhullar’s life was in danger, in India.

If Indian media want to hide facts like: Prof. Bhullar’s conviction is based on fractured confession extracted through torture in police custody, and that statement of confession carried thumb impression and not the signatures, and that presiding judge of supreme court bench acquitted Prof Bhullar and said that statement of confession was bundle of lies framed by the police, and that Bhullar’s family members were persecuted, subjected to enforced disappearance, torture and custodial killings, it can do so, because Indian media is free to not to report these things. But Indian media has not right to report false information.