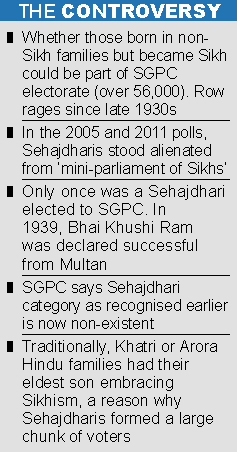 As per High Court rule, Sehajdharis can vote: Another attack on Sikh Institutions

Chandigarh, Punjab: In a recent decision before the Assembly elections, the Punjab and Haryana High Court today announced that Sehajdhari Sikhs can exercise their right to vote in the Sikh Gurdwara Prabandhak Committee polls.

The high court ruled: “The right to vote granted through Sections 49 & 92 of the 1925 Sikh Gurdwara Act to the eligible persons, which incidentally includes Sehajdhari Sikhs also, in our considered view, being legislature’s own decision, cannot be seen through religious spectacle…

“The original records though do not lend support to the vague allegations of mala fide or colourable exercise of power etc., yet lead to an irresistible inference that the exercise undertaken by the Central Government was misdirected and misconceived”.

The significant direction by a Full Bench of the High Court came more than eight years after the notification was issued by the Central Government, when the BJP was at the helm of affairs in Delhi.

One of the petitions challenging the October 8, 2003, notification was filed by the Sehajdhari Sikh Federation in the same year. Since then, the elections to the SGPC have been held twice; both subject to the decision on the writ petitions.

As of now it is not clear whether the House elected just about three months ago without the participation of the Sehajdhari Sikhs will remain. The issue was raised before the Full Bench of Justice Surya Kant, Justice M. Jeyapaul and Justice M.M.S. Bedi soon after the pronouncement of the judgment in a jam-packed courtroom.

Avtar Singh Makkar, SGPC Chief said, “The judgment has merely quashed the notification giving voting rights to Sehajdhari Sikhs. The court should have clarified on the recent SGPC elections as well. I have spoken with some Supreme Court lawyers, who say the new House is valid despite the order.”

One of the counsels asked the Bench to clarify whether the elections would now be null and void, as even the Supreme Court had ruled it would be subject to the decision on the petitions. Speaking for the Bench, Justice Surya Kant asserted the election was not the issue before the Full Bench. “The law will take its own course,” Justice Surya Kant asserted in the open court.

In its detailed order running into 128 pages, the Bench asserted: “That only those who have attained purity and are known as Amritdhari Sikhs, are solely entitled to be elected as members of the board or the committees, or that a novice Sikh like a Sehajdhari, who may or may not be a Keshadhari Sikh but has adopted the doctrines, ethics and tenets of Sikhism shall also be an eligible elector with a right to vote under Section 50 of the Act, too is a crystallised legislative policy built into the 1925 Act”. 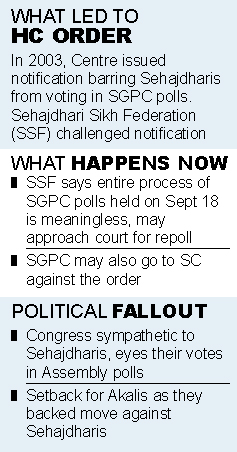 The Bench minced no words to hold the right to vote conferred on a class or category of people, subject to their possessing the requisite qualifications, is an integral part of the legislative policy of the 1925 Act. “It being a valuable legal right, cannot be taken away except by the competent legislature itself….

“The right to vote conferred by a statute is indubitably a legal right only and it can be taken away by the legislature at will…. Nothing precludes the legislature to re-write the eligibility conditions for the electors so as to include or exclude a class or category of people…”

The Bench concluded the “notification does not throw any light on the legal necessity for its issuance, namely, the functioning or operation….

“The notification dated October 8, 2003 is, hereby, quashed”. The Bench left it for the “appropriate and competent legislature” to decide as to whether any amendment in the provisions of the Gurdwara Act was to be carried out”.

Before parting with the orders, the Bench held: “We have not held that any particular class or category of Sikhs has a birth-right to participate in the election for the members of the board or the committees constituted under the Sikh Gurdwaras Act, 1925. We clarify that the issues raised or decided by us are purely legal in nature….”

2011-12-20
SSNews
Previous: Manpreet and his party on slippery slope as poll battle intensifies
Next: Who is Sehajdhari Sikh and who is Patit