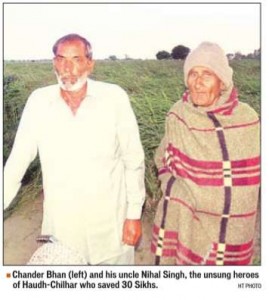 Amidst 1984 carnage, there were saviours too

Haryana (Ex-part of Punjab): It took the world nearly three decades to wake up to the horrific tragedy that numbed the soul of this village, and suddenly there’s a huge bustle with people of all hues rushing here.

Yet, none has acknowledged the selfless act of two men from a neighbouring village who risked their lives to save around 30 Sikhs as members of the community living in this little hamlet were attacked by a marauding mob on November 2, 1984, two days after Prime Minister Indira Gandhi’s assassination. Thirty-two persons were killed in the carnage.

No politician, religious leader or NGO has thus far realised how the two Good Samaritans -now-septuagenarian Nihal Singh and his nephew Chander Bhan of adjoining Nurpur village -evacuated 30 Sikhs to safety. The only words of acknowledgement and gratitude for them have come from one of the survivor families.

Recalls Manmohan Singh, who survived the horror: “I was in the fields and rushed back when I heard the ruckus. We took cover in one of the havelis.
The mobsters broke roofs, poured diesel and set houses on fire. After remaining in hiding for many hours, we finally mustered the courage to emerge from cover. Barefoot, we ran towards a neighbouring Jat village, Dhanora. However, we could not find a vehicle at Dhanora to get away. But Nihal Singh of Nurpur offered his tractor-trolley for our evacuation.“

Says Nihal’s nephew, Chander Bhan, who risked his life and drove the tarpaulin-covered tractor-trolley with the 30 people huddled underneath: “Almost all of them had suffered injuries. In pitch darkness, I drove them to Rewari, where I handed them over to a group of Sikh Labanas, who gave them shelter.“

Manmohan’s brother Joginder Singh, a lawyer at Rewari district courts, said: “Without Chander Bhan, our families could not have been saved. Bhan, along with some young men from Dhanora, Risal and Azad villages, ensured that our families reached a safe place.“

The then village sarpanch, Dhanpat Singh, who narrated the sequence of events of the day, is disappointed: “They put their lives at risk to bail out the survivors. But not one politician has uttered a word of praise for them. At least they deserve a pat on their back.“

Chander Bhan too said: “Hordes of people and dozens of vehicles come and go every day. No one has bothered to even talk to us.“
Members from the Shiromani Akali Dal (SAD) and its ally Bharatiya Janata Party (BJP) on Monday created ruckus in both Houses of Parliament demanding a probe into the killing of Sikhs in Haudh-Chilhar of Rewari district in 1984.

As soon as the Lok Sabha convened for the day, SAD members trooped into the Well, leading to speaker Meira Kumar adjourning the House till 11.15 am.

After the Lok Sabha re-convened, leader of the opposition Sushma Swaraj raised the grievances of the Akali Dal members saying they were demanding an inquiry into the alleged massacre.

The speaker asked them to raise the issue during Zero Hour, following which the Akali members returned to their seats.

A mob had allegedly wiped out a Sikh hamlet, Haudh near Chilhar village, on November 2, 1984, two days after the assassination of then prime minister Indira Gandhi, killing 32 people. The district administration has ordered a preliminary inquiry into the incident.