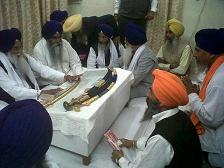 We the above mentioned, on behalf of and along with widows, victims, and survivors of November 1984 Sikh Genocide urge you reject Amitabh Bachchan’s claim of innocence and to support the prosecution of Bachchan for instigating killing of Sikhs in November 1984.

On October 31, 1984 after the death of Indira Gandhi, Amitabh Bachchan raised the slogans “Khoon ka badla khoon se laengae” and “khoon ke cheentain sikhon ke ghar tak puhanchanay chahiyay”. These slogans were broadcast across India through the Door Darshan and All India Radio which openly incited attack on Sikh population of India. This call by Bachchan started the widespread, systematic and organized attacks against Sikhs across India resulting in the killing of more than 30,000 and displacement of more than 300,000.

In spite of availability of witnesses and pending criminal complaint against Bachchan in Australia, SGPC President Avtar Singh Makkar is seeking clean chit for Amitabh Bachchan. Since justice campaign for November 1984 Sikh Genocide is being run internationally under the patronage of Sri Akal Takhat Sahib, we urge you to: