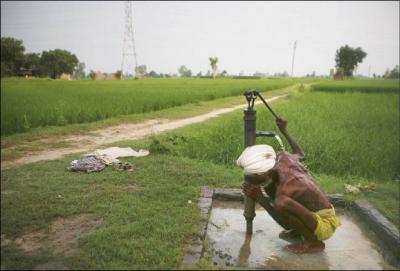 An elderly Sikh farmer Sukhchain Singh bathes with water from a tube well, near Batala, some 55 kilometers (34 miles) from Amritsar, Aug. 11. Excessive irrigation and the unrelenting thirst of tens of millions of people are causing groundwater levels in north India to drop dramatically, a problem that could lead to severe water shortages, according to a study lead by Matthew Rodell of the United States’ NASA Goddard Space Flight Center in Maryland, released Wednesday.

New York, USA: Unsustainable use of water in India’s northern states threatens farm output and can fuel the spectre of a major water crisis, distressing 11 crore people living there, warns a new study.

Human activity like irrigation has pushed groundwater levels in India’s north down by as much as one foot per year over the past seven years, says the study by scientists at the National Aeronautics and Space Administration (NASA). More than 26 cubic miles of groundwater vanished from aquifers in the states of Haryana, Punjab, Rajasthan and the National Capital Territory of Delhi since 2002, says the study that has used NASA’s satellite data.

“The amount lost is double the capacity of India’s largest surface-water reservoir, the Upper Wainganga, and almost three times the capacity of Lake Mead in Nevada, the largest reservoir in the US,” says the study, which has been published in the Nature magazine. The team of hydrologists found that the underground water supply was being pumped and consumed by human activities such as irrigating cropland and was draining the aquifers faster than natural processes can replenish them.

The finding is based on data from NASA’s Gravity Recovery and Climate Experiment (Grace) twin satellites, which sense changes in the distribution of Earth’s mass and gravity field distribution, including water masses stored above or below the surface. “As the twin satellites orbit 300 miles above Earth’s surface, their positions change relative to each other in response to variations in the pull of gravity,” said the magazine.

The scientists said data provided by India’s ministry of water resources for the study suggested groundwater use across India was far exceeding natural replenishment, but the regional rate of depletion was unknown. “We don’t know the absolute volume of water in the northern Indian aquifers, but Grace provides strong evidence that current rates of water extraction are not sustainable,” said the study leader and NASA scientist Matt Rodell.

“The region has become dependent on irrigation to maximize farm output,” said Rodell. “If measures are not taken to ensure sustainable groundwater usage, the consequences for the 114 million residents of the region may include a collapse of agricultural output and severe shortages of potable water.”
Although less than a third of farmland there is irrigated, crop irrigation accounts for up to 95 per cent of groundwater use. “If farmers could shift away from water-intensive crops, such as rice, and implement more efficient irrigation methods, that would help.” The researchers examined data and models of soil moisture, lake and reservoir storage, vegetation and glaciers in the nearby Himalayas in order to confirm that the apparent groundwater trend was real.

The loss was particularly alarming because it occurred when there was no unusual trend in rainfall. In fact, rainfall w as slightly above normal for the period. The only influence they couldn’t rule out was human. Changes in underground water mass affect gravity enough to provide a signal that can be measured by the Grace spacecraft. After accounting for other variations, such changes in gravity are translated into an equivalent change in water.