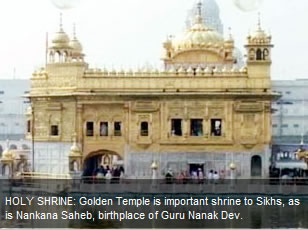 The Government on Tuesday had advised Indian pilgrims to avoid visiting Pakistan in view of the deteriorating security situation there.

The Haryana government has cancelled a pilgrimage for a Sikh festival next week but the Shiromani Gurdwara Parbandhak Committee (SGPC) on Tuesday said it was awaiting clearance for a large group of devotees.

The Home Ministry said in a statement that it was “not advisable for Indian pilgrims to visit Pakistan in the prevailing situation when frequent terrorist attacks are taking place in Punjab province of Pakistan, where all gurdwaras are situated”.

The Haryana government on Tuesday cancelled a pilgrimage to Sikh shrines in Pakistan following the travel advisory.

The pilgrimage to Pakistan, October 28 to November 6 from Sirsa, has been cancelled, keeping in mind the security of the pilgrims in the wake of recent terror attacks in Pakistan’s Punjab province, a spokesperson of the Haryana home department said.

The SGPC, the mini-parliament of the Sikh religion headquartered in Punjab’s Amritsar city, has applied for permission to the home ministry to allow Sikhs to go to Pakistan next week in connection with Gurpurab, the birth anniversary celebrations of Sikhism’s founder Guru Nanak Dev that falls November 2.

“We understand that the government issued the travel advisory in view of the bad situation in Pakistan. Anything can happen there. If the government feels that it (Pakistan) is unsafe, it should ban all travel to that country,” SGPC president Avtar Singh Makkar said.

“We have applied for permission for our jatha (group) to go there. If the clearance is given, it becomes the responsibility of the Indian government to talk to Pakistan to ensure security of the Sikh pilgrims,” he added.

“The (travel) advisory alone does not help. If we (SGPC) don’t send pilgrims, and pilgrims decide to go in smaller groups, it will be embarrassing for us,” Makkar added.

Earlier this month, over 200 Indians who had gone to Pakistan on pilgrimage had to cut short their visit due to security concerns after the Pakistan Army’s GHQ was attacked by terrorists in Rawalpindi.

(With inputs from IANS)

Previous: Rise Of the Khalsa – Launch of Sikh Documentary Film in California
Next: Thousands participate in Sikh Nagar Kirtan 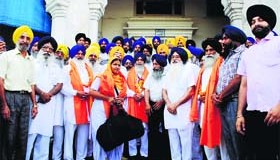