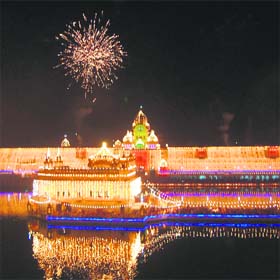 Amritsar, Punjab: A sea of devotees thronged the Golden Temple to participate in the Guru Nanak Dev birth anniversary celebrations where, they also witnessed ‘deepmala’, ‘aatishbazi’ and ‘jalau’- a splendid show of rare Sikh artifacts. The celebrations virtually took off with the “Parkash” of Guru Granth Sahib at 1 am. Lakhs of devotees prayed before the “Guru” in the sanctum sanctorum. The celebrations continued till late in the night with the “sangat” reciting “baani” in the Parkarma.

One of the biggest attractions for visiting devotees was “jalau”, the display of valuable historical Sikh artifacts, most of which belong to the golden era of Maharaja Ranjit Singh. The famed “Naulakha Haar”, “Sehra of Kunwar Naunihal Singh,” and a diamond-studded “Chattar” were part of the “jalau”.

Person in charge of the publicity wing of the SGPC Bhai Ram Singh said devotees also lit candles and lamps in the evening when “deepmala” and “aatishbazi” were organised at the Golden Temple.

The spectacular ‘aatishbazi’ was with a difference this year as no “ground-based” firecrackers were burst and only “air-bound” crackers were used.