Sikh community thanks firefighters for their efforts 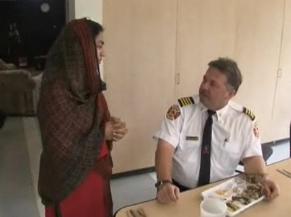 Vancouver, Canada: Firefighters, who saved a Sikh holy book from the burning ashes of a religious school in Vancouver last week, were rewarded for their efforts on Saturday.

Members of the city’s Sikh community showed up at a number of fire halls to give fire crews a taste of their traditional meal.

The holy book that was saved is the Guru Granth Saheb.

Somehow, it was rescued from a fire that nine days ago destroyed the Khalsa Elementary School.

It was kept in an area that was totally untouched by the fire. Everything else in the building was scorched and burnt

News that the book had been saved galvanized the Sikh community, and has lead to closer ties between Sikhs and local firefighters.

The gesture was more then appreciated.

Fire crews feasted on a traditional meal that included Saag, made out of mustard, and a sweet dish, made out of semolina.

They have been promised more any time they want it.

Tagged with: khalsa school fire bc