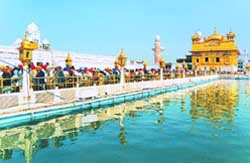 The SGPC has set up a high-powered committee headed by Dr Jaspal Singh, Vice-Chancellor, Punjabi University, to re-examine the dossier which was got prepared four years ago and also study the implications of the world heritage status for the holiest of the Sikh shrines. The other members of the committee are Prof Prithipal Singh Kapoor, a renowned Sikh scholar and pro-VC, Guru Nanak Dev University, Jasbir Singh Sabar, former Prof, GND University, and now working with the SGPC as in charge of Gurmat classes, Dr Gurnek Singh, Punjabi University, Waryam Singh, joint secretary, SGPC Dharam Prachar Committee, and Dr Jodh Singh, Punjabi University.

It is learnt that before appointing the committee, the SGPC had sought legal opinion from legal experts, mainly drawn from the High Court Bar, Chandigarh. The committee has further decided to seek the advice of legal luminaries in this regard.

During the tenure of Bibi Jagir Kaur as president of the SGPC, a decision was taken to close this case on the plea that there was no need for getting world heritage status for Harmandar Sahib. Professor Kapoor, who was also a member of the earlier committee, gave a dissenting note that no decision should be taken in a hurry.

Avtar Singh Makkar, president, SGPC, said he was getting done a study of the dossier and the issue. “If there is some constructive outcome, only then we will seek the world heritage status from Unesco,” he added.