SGPC for Haryana cleared by Hooda

Comments Off on SGPC for Haryana cleared by Hooda 458 Views 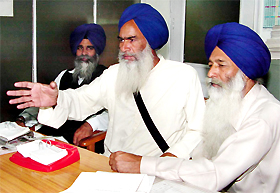 Amritsar, Punjab: Five years after the demand for a separate Shiromani Gurdwara Prabandhak Committee (SGPC) for Haryana began getting heard, chief minister Bhupinder Singh Hooda on Friday finally declared that the wish, which was getting louder by the day, would become a reality on November 1.

Aware of the symbolism at a time when the state is gearing up for assembly polls, the SGPC bifurcation would take place on Haryana Day and may yield a clutch of popular votes for Hooda and the Congress from the 1.3 million Sikhs in the state.

The announcement, which was immediately received with both anger and anxiety by the SGPC, a mini parliament of Sikhs with an annual turnover of around Rs 400 crore, has come five months after the Chatha Committee, instituted to go into the nitty-gritty of the festering issue, gave its recommendations to the Haryana government.

“Following recommendations of agriculture minister H S Chatha (who headed the committee), we had sought legal opinion on the constitution of a separate Sikh body in Haryana and have now decided in its favour,” Hooda said, adding, “an independent body would formally be constituted on November 1, the day we celebrate Haryana Day, provided there is no legal hurdle.”

Moments after Hooda’s promise to Haryana Sikhs, the SGPC headquarters in Amritsar reacted sharply to it and its president Avtar Singh Makkar said he would seek time from prime minister Manmohan Singh to discuss the issue. “He is from the minority committee and I am sure he would not allow this kind of division at the behest of political forces,” he said and added he might accompany Punjab CM Parkash Singh Badal when the latter goes to meet the PM on August 2.

This came even as Raghujit Singh Virk, SGPC’s executive member from Haryana, a man who is against a separate SGPC, said, “The move will fizzle out as we won’t allow the old divide-and-rule policy of Congress to succeed here.”

SGPC leaders and other Sikh leaders from Punjab had met the PM three months ago to seek his intervention in the matter as it became increasingly clear that Haryana was heading towards a separate SGPC for itself.

Soon after coming to power, Hooda had set up the Chatha committee to study possibilities of having a separate Sikh body in the state. Based on 1,28,566 affidavits of Sikh activists, the panel had then submitted a report this February, following which the government formed a three-member committee under the advocate general to examine the case and facilitate its implementation.

The demand first came into the limelight when out of the 170-seat strong SGPC, seven members from Haryana had leveled allegations of neglect of the state’s historical gurdwaras “even though they were adding Rs 10 crore of revenue in the SGPC’s kitty every year”.

There are 7 major historical gurdwaras in Haryana under the direct control of SGPC, while 18 others are under indirect control which sees elected members form the local management and one member from the SGPC co-opted into the panel.

Previous: Uranium may not be cause: Expert
Next: Remembering Delhi Sikh Genocide victims with green pledge