Awais Sheikh, a peace ambassador from Pakistan and counsel for Sarabjit Singh, who is facing death sentence in Pakistan, today called on Punjab Chief Minister Parkash Singh Badal and gave him a copy of his mercy petition to be given to Prime Minister Manmohan Singh.

He requested Badal to ask the Prime Minister to take up the issue with President of Pakistan Asif Ali Zardari, seeking clemency for Sarabjit. Shiekh, accompanied by Sarabjit’s sister Dalbir Kaur and daughter Swapandeep Kaur, met the CM at his residence and made an impassioned appeal to pursue Sarabjit’s case.

He said he also visited the native village of Sarabjit and interacted with people there. He said he would return to Pakistan with the copy of appeal for Sarabjit’s release signed by his over one lakh well-wishers. Badal informed Sheikh that he had already taken up the matter with the Prime Minister and the Ministry of External Affairs to secure the release of Sarabjit.

He thanked Sheikh for sincerely defending his case in Pakistan. Sheikh also presented Hindi version of his book, “Samjhota Express,” on Indo-Pak relations to the Chief Minister. 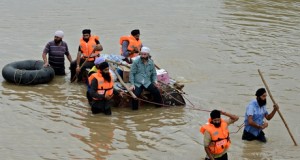