Rulda Singh, was a Sikh face of Hindu terrorist organisation RSS. Lately, he had been issuing statements and organizing hindu based Sikh programs in India. His sole mission was to assimilate Sikhs into hinduism similar to what Arya Samaj tried to do in the early 1900’s.

The Babbar Khalsa Internationl (BKI) had claimed responsibility for the attack on him.

Punjab Local bodies & Industries Minister Manoranjan Kalia has expressed deep grief on the sad demise of Rulda Singh. He said that BJP and as well as RSS has lost its precious diamond.

Kalia spoken to PGI director Dr. KK Talwar over phone for speedy discharge of dead body from PGI as no doctors were available for post mortem due to Independence Day holiday. 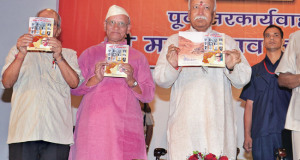