Rise Of the Khalsa – Launch of Sikh Documentary Film in California

“The Khalsa is a mission to fight against cruelty and injustice.
It is a fight for spiritual survival and the war of righteousness.” 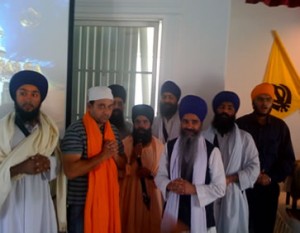 Yuba City, California: The first title in this inspiring series was called ‘RISE OF THE KHALSA‘ which was created over a period of two years. This documentary was very well received and the director earned the accolade of: ‘Best International Director for Documentary’ award at the New York independent international film festival.

This first project was a humble effort to project to the audience the concept of Khalsa, an order that stands for all that is “Right and Just”. The film is a brief journey into the Khalsa tradition, showcasing it’s roots and its transition to the modern world.

To capture some of the footage for this documentary, the entire crew underwent daring and dangerous moments to bring never before seen moments to the screen.

The Sikh Media Society, Non-Profit Organization is launching the dvds of RISE OF THE KHALSA documentary at Yuba City Nagar Kirtan on 31st Oct and Nov 1. Come and buy yourself a copy of this documentary. It will be a great support for them to complete their upcoming new project on Khalsa called “MARTYRS”. DVD will have both English and Punjabi language option.It will also have Spanish subtitles and you will be glad to know that film is going to be dubbed in Spanish as well. Director and Founder of the Organization, Jagmeet Singh Samundri will be present at the launch site in Yuba City.

Tagged with: jagmeet samundri Rise of the khalsa sikh documentary