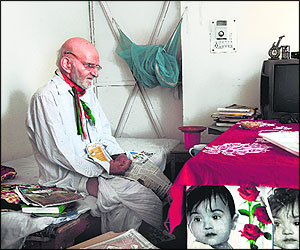 Delhi, India: Toufique Kitchlew wrote a page of his memoirs and stopped. It has been eight months since he was forced to leave Amritsar, the city of his birth and where he lived during the tumultuous days leading up to the Partition, since he could not find an accommodation there.

In Lampur on the outskirts of Delhi, where he now lives in a government accommodation, he has picked up the pen often but words never flowed.

Son of legendary freedom fighter Saifuddin Kitchlew, Toufique Kitchlew, 78, remembers roaming around in the lanes of Amritsar distributing pamphlets, collecting money, and participating in protests. It’s the city where he had watched his father rousing the people in his speeches.

In 1947, as their house was burnt down and communal tensions raged, well-wishers told the Kitchlews to leave Amritsar. The family moved to Delhi.

Decades on, that parting still hurts. “That’s my city — I have memories there,” he said. “I don’t want to live here.”

He returned to Amritsar often after that. When he decided to spend the remaining years of his life writing a personal memoir, he decided to go back for good. But in the three months he spent looking for an accommodation, he hit the wall often.

Kitchlew packed and returned to Delhi.

Recently, after he wrote to the Punjab government that he was forced to leave Amritsar since no one would rent out a house to him because of his religion, the Prakash Singh Badal government offered him a rent-free accommodation in Amritsar and a lifetime pension. Kitchlew has accepted the offer but is still waiting for the authorities to tell him his new address in Amritsar.

In the remote Delhi village where he was given quarters by Chief Minister Sheila Dikshit earlier this year, Kitchlew lives with Reena, his domestic help, who takes care of him. Arthritic and rheumatic, Kitchlew can’t walk; he never married — he says he didn’t believe in the institution of marriage — and his brothers are dead and two of his surviving sisters are in Pakistan.

“At the university, they often asked me whether I was going to become great like my father,” Kitchew said. “Now I say I am the struggling son of a great father.”

Saifuddin Kitchlew’s family fell on hard times while his children were still young. While there was enough to pay the school fees, there wasn’t enough to replace the old, worn school shoes. “That’s the price we paid for freedom: father would donate all he received to the (freedom) movement.

“And now, there is no place for me in our own city.”

Previous: LVIA to boot restaurant owners because they look like Arabs
Next: India Must be Held Accountable for Manipur Fake Encounter