Missing Sikh Nevada girl found with her relative in Indiana 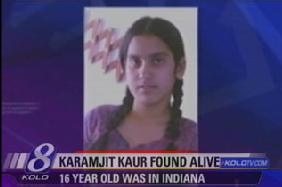 Reno, Nevada: Reno police say they have found a 16-year-old girl who went missing last week with her brother-in-law in Indiana.

Authorities said they found Karamjit Kaur unharmed with Parvinder Singh at a hotel in Merrillville, Ind.

Kaur had ben missing since Wednesday after she was last seen riding her bicycle.

Police say the case is still under investigation to determine whether there was any criminal conduct.

Authorities combed the area where Kaur was last seen riding a bike last week, and her parents pleaded for her safe return. The bike was found a day later at a skateboarding park.