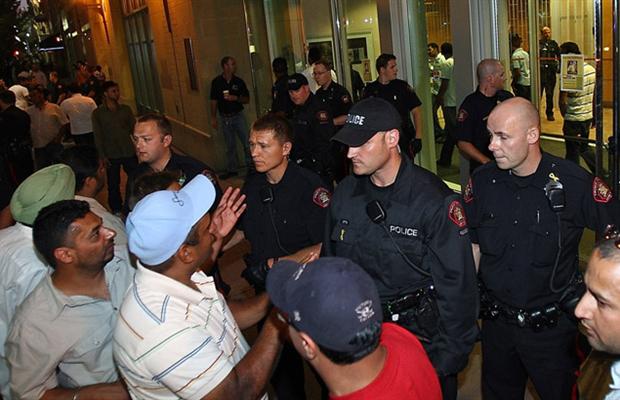 Calgary, Canada: The show went on Monday afternoon for fans of Punjabi singing star Gurdas Maan, whose concert was stopped amid controversy the night before.

But the dark clouds above Prairie Winds Park, where the outdoor makeup show was held, weren’t the only ones looming over the event.

The event’s promoter said he plans to launch legal action against the original venue– the Telus Convention Centre — and some ticket holders said they weren’t satisfied with Monday’s makeup show.

Despite explanations from Dhaliwal and others that the kirpan isn’t considered a weapon, convention centre officials refused to budge.

“They were stubborn–they wouldn’t listen,” he said.

Dhaliwal estimated there were about 10 people with kirpans–mainly older men who had come with their families–who were initially denied entry.

The promoter said he even offered to personally assume responsibility for their conduct and escort them to seats backstage, but the venue’s general manager wouldn’t agree.

“I do shows everywhere — I’ve never had an issue,” said Dhaliwal, adding a show Saturday at Vancouver’s Pacific Coliseum attracted 12,000 people with no trouble over kirpans.

“It’s going to be a very big legal battle with the Telus Convention Centre very soon.”

No one from the convention centre’s management or board of directors returned the Herald’s calls Monday.

Dhaliwal admitted that emotions ran high at the doors when the group was told they couldn’t get in, but even so, he said that was no reason to stop the concert in progress at about 9:30 p. m.

“They had no right to pull the plug on the show when (the crowd) inside the hall wasn’t a problem,” he said.

Pay duty police hired for the show called in on-duty officers to help disperse the crowd outside and clear the hall of concertgoers, many of whom paid $100 or more for a ticket.

“(Maan’s) a good singer and it’s worth it, but things went wrong last night,” said Gurmail Bhattal, as he waited for Monday’s concert to begin.

But Bhattal was among many original ticket holders who felt the temporary setup in Prairie Winds Park paled in comparison to the lavish show they would have experienced indoors at the convention centre.

“It’s not the same thing,” said Bhattal, adding he paid $800 for four VIP tickets for himself, his wife and two kids.

Considering how long Sikhs have been in Canada and how long kirpans have been accepted in so many other public places, concertgoers were still incredulous Monday that security guards staffing a Punjabi event weren’t better educated about its religious importance.

“They let kirpans everywhere else –why did they stop it there?” said Raju Sidhu.