Amritsar, Punjab: Haryana Sikh Gurdwara Parbandhak Committee (HSGPC) leader Jagdish Singh Jhinda and his five associates-most of whom are also members of the Shiromani Gurdwara Parbandhak Committee (SGPC)- have been summoned at Akal Takht on September 19 by Jathedar Giani Gurbachan Singh and the high Sikh priests with direction to explain violation of the Sikh “Maryada” by them for “attack” on gurdwara in Kurukshetra .

Akal Takht Jathedar and Sikh high priests have made it clear Akal Takht has nothing to do with the demand for separate SGPC for Haryana gurdwaras asserting Takht was concerned with Sikh “Maryada”.

Giving new twist to the demand for separate SGPC for Haryana , Giani Gurbachan Singh indicated any such demand could, however, be discussed and considered at Akal Takht if the highest Sikh institution was approached by some organisation in this respect.

Akal Takht Jathedar has asked the Government of India to take up the issue with Haryana government to avoid repetition of the incident.

“ If Sikhs of Haryana come to Akal Takht a discussion can be initiated. But no organisation, except the SGPC, has the right to implement “Sewa Sambhal” of gurdwaras. Referring to the Kurukshetra incident, Akal Takht Jathedar said Jhinda and his associates-Kanwaljit Singh Ajnala, Bibi Ravinder Kaur, Avtaar Singh Cheeka, Hazoor Singh Nambardar, and Joginder Singh Yamunanagar- have been directed to appear before Akal Takht to explain why they had indulged in “acts of violence” and why they “hurt” the Sikh sentiments apart from “violating the Sikh Maryada. “ we are keen to learn what forced Jhinda and others to take such a step”, said Giani Gurbachan Singh and four high Sikh priests- Tarlochan Singh, Balwant Singh, Jagtar Singh and Mal Singh. They justified booking of Jhinda and others by the police adding Jhinda and others could be given fresh chance to appear at Akal Takht in case they were detained by the police.

“Jhinda and others made brazen effort by barging into the gurdwara premises with arms, forcing the “Granthi Singh” to leave “Hazoori” of Guru Granth Sahib and banning the entry of the devotees into the gurdwara. It is the duty of the Haryana government, to ensure prevalence of rule of law,” said Giani Gurbachan Singh who, had criticised Bhupinder Singh Hooda- led Haryana government for “instigating” Jhinda and his associates.

Akal Takht Jathedar and the high Sikh priests have asked the Sikhs to remain peaceful and do “Simran”.

Previous: HSGPC tries to take over gurdwara
Next: 4 Sikh's assaulted in Oz 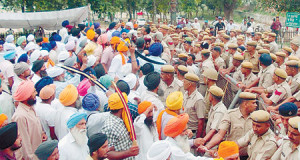 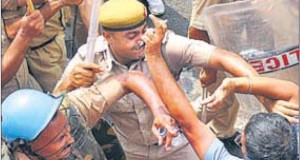