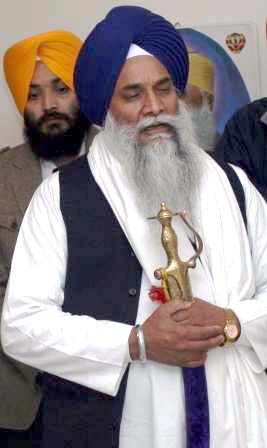 Fremont, California: Giani Gurbachan Singh, Jathedar of Sri Akal Takht Sahib, who was here on a invitation of the committee of Fremont Gurdwara Sahib, received a warm welcome from the sangat. Fremont Sangat welcomed the Singh Sahib and asked him to take the initiative of leading the efforts to get released the Sikh youth languishing in jails since 1984.

Sangat also appealed to the Jathedar Sahib to work for the release of Prof Devinderpal Singh Bhullar. Significantly, Prof Bhullar’s mother Bibi Upkar Kaur ji was present on the occasion and it was in her presence that Jathedar Sahib assured all support for the efforts.

Addressing the Sikh sangat, Giani Gurbachan Singh ji hailed the initiatives taken and plans drafted by the sangat of Fremont gurdwara. Slamming the Indian establishment for the attack on Sri Darbar Sahib in 1984, the jathedar said no one who ever attacked this center of Sikhism survived more than 154 days.

Bibi Upkaar Kaur also addressed the sangat and asked the Sikh community to work towards securing the freedom of Prof Bhullar. The Jathedar Sahib said he has already written in this connection to the Punjab government. He appealed for unity in the panth and said it was time that the community leaders focused on a practical approach and work.

American Gurdwara Prabandhak Committee coordinator Pritpal Singh asked him to ensure that some system is evolved for the selection and appointment of a Jathedar.

Pritpal Singh also expressed concern at the trend of gurdwaras outside India also going in for elections for their managing committees and said things have come to such a pass that non-Sikhs were being made voters to elect the managing panels. He asked the Jathedar to issue some kind of an edict or directive about such practice.

Later, the sangat did a parikarma of the gurdwara that was led by the hand written bir of Sri Guru Granth Sahib presented to the Fremont Gurdwara by Bhai Jaswant Singh Khosa.

Later, the Jathedar said while the gurughar was open to a person of any and every persuasion, a voter with a right to elect the management of any gurdwara has to be a Sikh and cannot be a non-Sikh. As for the managers of the Gurdwara, Giani Gurbachan Singh said they have to be Amritdharis. 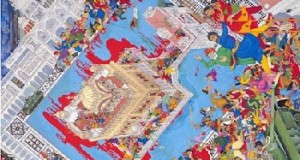