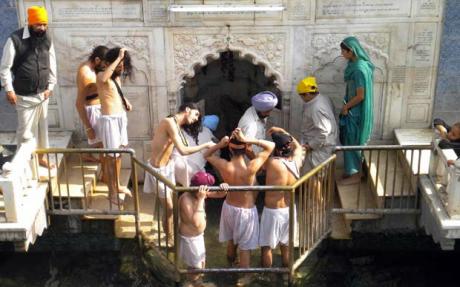 Lahore, Pakistan: Indian authorities urged the faithful to shun the annual pilgrimage to the neighbouring country, fearing for their safety as deadly attacks by Islamist extremists have risen sharply in Pakistan, killing more than 340 people since October.

Tensions between India and Pakistan, nuclear-armed powers that have fought three wars since independence, have further increased since last year’s Mumbai attacks, which New Delhi blamed on Pakistani militants.

But for defiant Sikhs, seeing the sites where their most revered spiritual leader, Guru Nanak, once stood was worth the risk.

“I had a strong will this year to visit holy shrines in Pakistan, despite all the advice and security threats being highlighted in the media,” said Manjeet Kor, a 20-year-old woman from the Poonch district of Indian Kashmir.

“If I have to die in a bomb blast in Pakistan, nobody can avert it, so I decided to travel to Pakistan,” she said, strolling in the serene courtyard of Hasan Abdal’s sacred Gurdwara Panja Sahib shrine.

Sikhs arrived en masse from India this week to celebrate the anniversary of the birth of Guru Nanak, founder of the Sikh religion.

Increasing violence has seen most foreign visitors shun the Muslim nation. But the hardy Sikh pilgrims were not to be deterred, even though numbers were down on an expected 4,100. The authorities estimated 2,100 turned out for the event.

The tour began in Guru Nanak’s birthplace, Nankana Sahib, near the eastern city of Lahore, before moving to Hasan Abdal, one of the holiest sites in world Sikhism, about 50 kilometres (31 miles) from Islamabad.

Guru Nanak is said to have visited Hasan Abdal in 1521, inspiring locals with his spiritual teachings and leaving a hand print in stone.

“Since then, this place is the Mecca of Sikhs. We will come here even if we come here to die,” said Amar Singh, a retired Indian army captain, adjusting a large blue turban and staring in awe at the main shrine.

Pakistan has seen a rise in attacks by the Taliban and al-Qaeda-linked groups since mid-2007, and as the army this year has stepped up operations against the insurgents, retaliatory bomb and suicide attacks have risen.

In the deadliest attack in two years, a car bombing killed 118 people on October 28 in the north-western city of Peshawar. Islamabad and its twin city of Rawalpindi have also been attacked repeatedly in the past month.

Pakistani police were taking no chances, and Gurdwara Panja Sahib was transformed into a fortress for the pilgrimage which ended on Thursday.

Barricades blocked all traffic on the roads around the shrine. Heavily armed police stood by buildings and on streets, while authorities banned the movement of all non-Sikhs around the holy complex.

Devotees – men in traditional turbans and tunics and women in colourful jewelry – worshipped in the courtyard, while some took an absolving dip in the water encircling the Gurdwara Punja Sahib complex.

“We have installed 35 security cameras around this complex and deployed 500 security guards to protect this area,” said Hasan Akhtar, a senior police official on duty at the site.

“There is no specific threat to this place, but we are confronting security problems as a whole in our country,” he told AFP.

Despite the historic roots of Sikhism in modern-day Pakistan, the religion is not widely practised in the mainly Muslim nation, with only about 30,000 Sikhs in the country, US State Department figures indicate.

Although they mostly live peacefully side by side with Muslims, Sikhs in parts of the north-west tribal region have been forced to pay protection money to a Taliban-linked Islamist militia.

The community in the Afghan border regions has also reported death threats, while Sikhs say they have been bullied into observing conservative Islamic traditions such as not shaving, while women have been pressured to wear burkas.

“Pakistani Sikhs feel threatened by the Taliban and other extremist forces,” said Paramjeet Singh, 35, a pilgrim who works in construction in Indian Punjab.

“The government of Pakistan should provide protection to minorities and their holy places against terrorists.”