How-to CDs, clinics to get the Sikh turban right 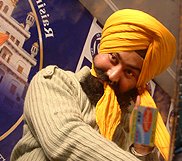 Chandigarh, Punjab: Just how serious is the threat to the Sikh turban from the community’s youth, increasingly at odds with the headgear? Pretty grave, it seems.

Worried at the trend of Sikh boys shorn of long hair and sans turban, the Akaal Purkh Ki Fauj (APKF), literally meaning ‘army of God’ and with its international headquarters in Malaysia, has decided to open 100 ‘‘turban clinics across India within the next six months. The organization, which swears by technology but harps on tradition, will have experts in these clinics teaching people how to tie the ‘pagri’ in a variety of styles.

Not just that, it will also distribute CDs of ‘Turban Tutor’, a software that helps people learn techniques at home, and ‘Smart Turban’, another software that wraps in 32 different turban styles, which members have developed themselves.

‘‘It’s an emergency situation,’’ said Jaswinder Singh Advocate, SGPC member and director of the Turban Pride Movement (under the APKF umbrella). ‘‘By April 13, 2010, we plan to set up 100 turban clinics across the country. The intention is to motivate Sikh youngsters and kids to take pride in the turban. CDs of Turban Tutor and Smart Turban will be distributed free of cost to people walking into the clinics,’’ he said.

Advocate added that the clinics will also pass on lessons in hair care management. The Shiromani Gurdwara Parbandhak Committee, the apex body of Sikhs, has also put its weight behind the project. SGPC chief Avtar Singh Makkar said, ‘‘The turban is an integral part of a Sikh’s life. We need innovative techniques to motivate our youngsters and we will support this effort wholeheartedly. It is worrisome the way turbans are vanishing’’.

The APKF, with 80,000 members world wide, said it would do everything to make the mission a success. ‘‘The situation is quite bleak, Advocate said.

The first turban clinic was launched in Amritsar in 2006 on an experimental basis. But now branches are ready to be opened at a string of towns and cities.