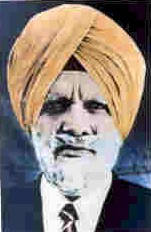 Chandigarh, Punjab: Former Punjab Chief Minister and veteran Congress leader Harcharan Singh Brar died at the PGI here today. He had been unwell of late. The Punjab Government has announced state funeral that will take place at his village, Sarai Naga (Near Muktsar), at 3 pm tomorrow.

Brar, 87, is survived by son Kanwaljeet Singh (Sunny) Brar (a sitting Congress MLA) and daughter Bubli Brar. Brar remained the Governor of Orissa as well as that of Haryana (from September 24, 1977, to December 9, 1979).

The Punjab Government has declared 3-day mourning from today. The National Flag will fly half-mast on all government buildings while government offices, boards, corporations and education institutions will remain closed tomorrow.

Hundreds of condolence messages that poured in as the news of Brar’s death spread described him as an able administrator, keen farmer, statesman and a man with vision. Brar was sworn in as the Chief Minister of Punjab on August 31, 1995, to fill in the void created by the assassination of the then CM Beant Singh. During his 14-month term as the state head, he created Muktsar and Moga districts.

Himself from Malwa, he was married to Gurbinder Kaur, who belonged to the Kairon family from Majah. Brar had been ill for the past some years.