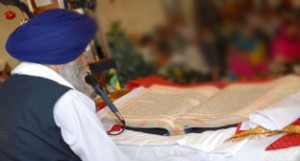 Amritsar, Punjab: Concerned over the developments in the aftermath of the Vienna incident, Akal Takht Jathedar Giani Gurbachan Singh urged the followers of Guru Ravidass not to sever ties with Guru Granth Sahib in haste.

He asked the leaders of the community before arriving at any final decision they must use their discretion, patience and sincere approach. He said the holy Sikh scriptures contained hymns of great sages and saints who belonged to different sects.

Addressing the dharna, Ram Lubhaya Ladhar, president of the action committee, criticised Sarna for his reported statement in favour of the accused in the Vienna incident, in which Sant Ramanand of Dera Sachkhand was killed and Sant Niranjan Dass was seriously injured. He said the statement had hurt the sentiments of the followers of Guru Ravidass and could again disturb the hard earned peace and social harmony in the state. The action committee also submitted a memorandum to the ADC demanding immediate strict action against Sarna.