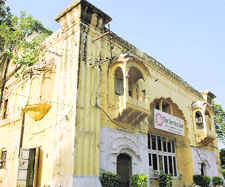 Amritsar, Punjab: Three clubs, Amritsar, Services and Lumsden Clubs, of the British era situated in the Ram Bagh Gardens, have urged Minister of Tourism Kumari Selja to get the area under their jurisdiction de-notified on the lines of Maharaja Ranjit Singh Panaroma constructed recently in the protected area.

Selja has written to the Prime Minister, who holds charge of the Department of Culture and Archaeology, urging him to look into the representation of the three clubs seeking de-notification of 76 kanals in their control out of the 718.12 kanals declared protected.

Selja said the clubs were set up in the Ram Bagh Gardens 100 years ago and there was no heritage or historical building in possession of the clubs. She urged the PM to de-notify the area under the control of clubs as they were ready to surrender any building/monument of national importance coming under notified heritage building pertaining to the summer palace of Maharaja Ranjit Singh.

JL Mehra, coordinator of the three clubs, said the summer palace of the Maharaja was situated only in four kanals of the bagh and only seven buildings had been notified as heritage buildings, out of which only one such building forms part of a club and the management of that club was ready to surrender the building to the ASI.

The lease of all three clubs was extended by the Municipal Corporation up to 2020 in a resolution passed in 2006. He said the corporation leased only bare land to the clubs and the buildings were raised in the course of time by the managements of the clubs.

Mehra reiterated that they were ready to maintain the area under their control per ASI guidelines and if the ASI wanted, it could have support of the clubs to maintain other parts of the gardens. He said 30 per cent members of the club represented senior citizen members who did not pay any fee, but had opportunity to live a purposeful life. He said there were 5,000 members of the club involving one lakh people of the city connected with the activities.

The ASI has urged the government to hand over the entire garden for conservation and bring back old glory developed by the Sikh ruler.

The clubs have also written to KN Shrivastava, Director-General, ASI, in this regard, besides seeking appointment for discussion and clarifying the position.

Previous: Queen wanted to end Sikh Rule in Punjab at any cost
Next: Amarinder for separate SGPC for Haryana