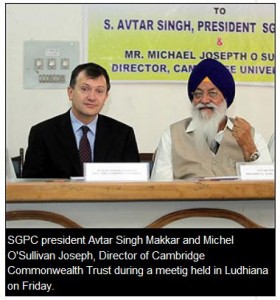 London, UK: For the first time, the University of Cambridge has signed an agreement with the Shiromani Gurudwara Prabandhak Committee (SGPC) to award scholarships to five outstanding Sikh students to pursue a Masters or PhD at the ancient seat of learning.

The agreement, which will commence in 2010, will enable five outstanding Sikh students to pursue a Masters degree or PhD at Cambridge, in subjects relevant to the development of higher education in Punjab.

Before the signing ceremony, large number of Sikhs from Cambridge and elsewhere in the UK participated in a traditional prayer meeting (Sehaj Path, Shabad Kirtan and Bhog) in Trinity Hall.

Also, perhaps for the first time in the University’s 800 year history the Sikh Holy Book was brought to the institution by people of the community visiting from London.

The Vice-Chancellor of the university said she looked forward to welcoming the new Sikh students and that they would add to the richness of the community in Cambridge.

The Cambridge University was honored by the visit of the Holy Scripture, the Vice-Chancellor added.

Avtar Singh Makkar congratulated the University for 800 successful years of producing intellectual leaders and thinkers who changed the face of the world.

Makkar said that he looked forward to similar opportunities for Sikh students in Cambridge, who would return to their native country and promote education there at all levels.

The Master of Trinity Hall, Prof Martin Daunton, played host to the visitors from Punjab during their stay in Cambridge.